We don't know what we are talking about.

The state of physics today is like it was when we were mystified by radioactivity. They were missing something absolutely fundamental. We are missing perhaps something as profound as they were back then.

A rare moment of honesty from a true poser.

David Jonathan Gross (born February 19, 1941) is an American theoretical physicist and string theorist. Along with Frank Wilczek and David Politzer, he was awarded the 2004 Nobel Prize in Physics (!) for their discovery of asymptotic freedom.

He is also a faculty member in the UCSB Physics Department and is currently affiliated with the Institute for Quantum Studies at Chapman University in California.

He is a foreign member of the Chinese Academy of Sciences. #Chyna

Let's just say David Gross photos are a regular part of the rotation on my dartboard.

Some string theorists prefer to believe that String Theory is too arcane to be understood by human beings, rather than consider the possibility that it might just be wrong.
- Lee Smolin, "The Trouble With Physics: The Rise Of String Theory, The Fall Of A Science And What Comes Next"

"Please pick one from this group:"

"2. Critics of physics are an endangered species."

"3. In a field without a clue, Lee Smolin has something to offer."

String Theory is an attempt at a deeper description of nature by thinking of an elementary particle not as a little point but as a little loop of vibrating string.
- Edward Witten

This is so pathetic one actually feels sorry for this guy.

Me thinks Ed is also ashamed of his "magic mushroom" days. Check out how his Wikipedia page has changed:

He is the Charles Simonyi Professor in the School of Natural Sciences at the Institute for Advanced Study.

Witten is a researcher in String Theory, quantum gravity, supersymmetric quantum field theories, and other areas of mathematical physics.

In addition to his contributions to physics, Witten's work has significantly impacted pure mathematics.

He is considered to be the practical founder of M-theory.

Now see if you can spot what used to be more emphasized, like on this Wayback Machine snapshot of his Wiki page from March 16, 2007:

Edward Witten (born August 26, 1951) is an American mathematical physicist, Fields Medalist, and professor at the Institute for Advanced Study.

He is one of the world's leading researchers in string theory (as the founder of M-theory) and quantum field theory.

Oh how the mighty have fallen. Dot com.

In science the primary duty of ideas is to be useful and interesting even more than to be 'true'.
- Wilfred Trotter (1872-1939)

What a disgusting thing to say.

Let's take a glance at this madman's Wikipedia page:

He was also known for his studies on social psychology, most notably for his concept of the herd instinct, which he first outlined in two published papers in 1908, and later in his famous popular work "Instincts of the Herd in Peace and War".

Only other time I've heard someone mention "herd" behavior is when a pro-vaxxer talks about "herd immunity".

Clearly Rockefeller would have loved this guy.

A generative grammar must be a system of rules that can iterate to generate an indefinitely large number of structures.1

This system of rules can be analyzed into the three major components of a generative grammar: the syntactic, phonological, and semantic components.2

- Noam Chomsky, who wrote the Preface to "An Introduction To String Theory"

1 A pompous Leftist wrote the "Preface to a String Theory"? You can't make this stuff up.

2 If you look up "inscrutable" in the dictionary, you'll see a gilded photo of Avram Noam Chomsky.

3 If you look up "asinine" in the dictionary, you'll see the same bozo's mug.

All useless science is an empty boast.
- Gaius Julius Phaedrus 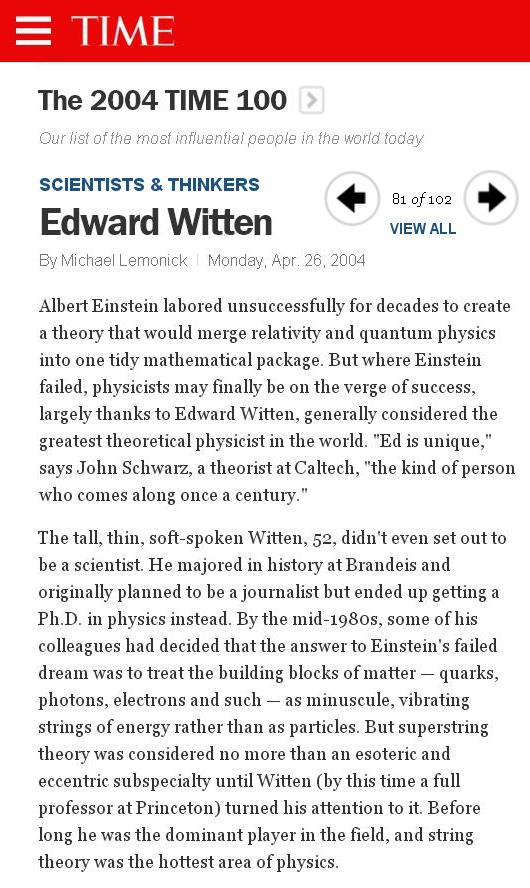 No
one
has
been
boasted
about
more
than
Edward
Witten.

"The Man
Who Led
the Second
Superstring
Revolution"

"Best
scientist
of
them
all"

There
are
probably
thousands
of
other
examples.

Any theory is better than no theory.
- Fuller Albright

Any work of science, no matter what its point of departure, cannot become fully convincing until it crosses the boundary between the theoretical and the experimental.
- Gaston Bachelard

"Theories have to be testable" seems easier to say.

Had I been present at the Creation, I would have given some useful hints for the better ordering of the universe.
- Alfonso X of Castile (1221-1284), after having String Theory explained to him

I'm on the verge of a major breakthrough, but I'm also at the point where physics ends and chemistry begins, so I'll have to drop the whole thing.
- cartoonist (or string theorist) Sidney Harris

If an explanation is so vague in its inherent nature, or so unskillfully molded in its formulation, that specific deductions subject to empirical verification or refutation can not be based upon it, then it can never serve as a working hypothesis. A hypothesis with which one can not work is not a working hypothesis.
- Douglas Wilson Johnson (1878-1944)

What does it say about String Theory when a 19th century geographer can beat the crap out of it?

String Theory, by this measure, is the ultimate physics stinker.

Not all fields are fruitful.
- Marcus Tullius Cicero

Nothing leads the scientist so astray as a premature truth.
- Jean Rostand, 1939

At which point this quote's present value drops to zero.

Reality may avoid the obligation to be interesting, but hypotheses may not.
- Jorge Luis Borges

Or they are wrong.

Science is a great many things, but in the end they all return to this: science is the acceptance of what works and the rejection of what does not. That needs more courage than we might think.
- Jacob Bronowski

No courage would be needed if research subsidies were stopped.

Scientists dream up fantasies and then pursue a highly selective hunt for new facts which fit these fantasies. This process may be described as 'science creating its own universe' (as long as one remembers that 'creating' here is used in a provocative-idiosyncratic sense).
- Imre Lakatos

Imre Lakatos was a Hungarian philosopher of mathematics and science, known for his thesis of the fallibility of mathematics and its 'methodology of proofs and refutations'." On pseudoscience:
Lakatos's own key examples of pseudoscience were Ptolemaic astronomy, Immanuel Velikovsky's planetary cosmogony, Freudian psychoanalysis, Marxism, Lysenko's biology, Niels Bohr's quantum mechanics, astrology, psychiatry, and neoclassical economics.

For his thoughts on Niels Bohr alone, I'm springing for an Imre Lakatos full back piece.

Sometimes attaining the deepest familiarity with a question is our best substitute for actually having the answer.
- Brian Greene, "The Elegant Universe"

The level of corruption in Brian String Theory's statement is ...total.

The best hope of science lies in its greatest minds being often brilliantly and determinedly wrong.
- Edwin G. Boring

Getting things wrong is the easy part.

Getting anyone to call a wrong thing wrong?

The equations that really work in describing nature with the most generality and the greatest simplicity are very elegant and subtle.
- Edward Witten

The great tragedy of science -- the slaying of a beautiful hypothesis by an ugly fact.
- Thomas Henry Huxley

#StopScientificResearchSubsidies, or sharpen your battle axe.

The laws of Nature give a fundamental role to certain entities. We are not really sure what they are, but at the present level of understanding they seem to be the elementary quantum fields.
- Steven Weinberg

It's shocking how useless this quote is.

What a truly useless "scientist".

Needless to say he was awarded a Nobel prize...for QCD, the stenchiest mound of dark matter in physics.

There is something fascinating about science. One gets such wholesale returns of conjecture out of such a trifling investment of fact.
- Mark Twain

When weird math mumbo jumbo appears in your physics textbook, it's time to drop your String Theory courses.

These mathematicians make me tired! When you ask them to work out a sum they take a piece of paper, cover it with rows of A's, B's, and X's and Y's, scatter a mess of flyspecks over them, and then give you an answer that's all wrong!
- Thomas Edison

These String Theorists make me tired! When you ask them to explain the universe they take a piece of paper, cover it with rows of A's, B's, and X's and Y's, scatter a mess of flyspecks over them, and then give you an answer that's all wrong!

What of the scientists who assumed that continents were stable, that the hereditary material was protein, or that all other galaxies lay within the Milky Way?

These false and abandoned efforts were pursued with passion by brilliant and honourable scientists.

Ever tried to predict the next good movie? It's almost impossible. Your favorite director is no guaranty. Same with your favorite actor, or writer.

This is why payment should only come after the value of a thought has been realized.

In other words, wait for the buzz to die down and then pick up your movies for free at your local library. Do this one hundred times and, with a bit of luck, you'll find one good movie.

When we understand String Theory, we will know how the universe began. It won't have much effect on how we live, but it is important to understand where we come from and what we can expect to find as we explore.
- Stephen Hawking

Shows how effective the sympathy ploy is.

M-theory is the unified theory Einstein was hoping to find.
- Stephen Hawking

Which is why zero people understand String Theory.

The birth of an idea is that happy moment when everything appears possible and reality has not yet entered into the problem.
- Rudolph Diesel

That approach will never disappoint.

Though useful for making String Theory look bad, this is a pretty idiotic quote.

But then Thomson thought the Sun was powered by gravitation energy.

Fantasy can open a way out of the prison-house of our mundane habits of seeing and being.

A way that leads to an otherworld more real and resplendent that the one out the window.

A lot of druggies think this way.

Fact is, pursuing fantasies doesn't work in a real field like physics.

Unless garbage theories are subsidized with government money.

If there is a God, He has done such a bad job that he isn't worth discussing.
- Isaac Asimov

Even if String Theory is valid, physicists have done such a bad job explaining it that it isn't worth discussing.